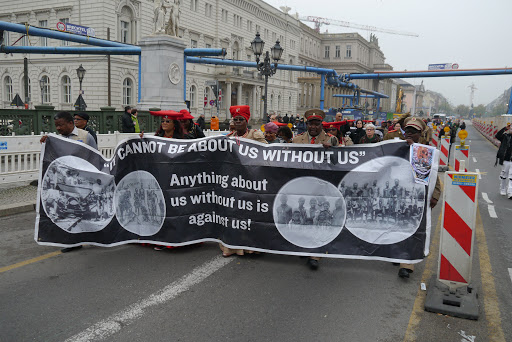 From 1904-1908, the Germans committed a brutal genocide and the most serious crimes against humanity in what is now Namibia. The goal of Germany was to completely wipe out the native tribes, the Ovaherero and the Nama.
In this genocide and extermination, the Germans systematically robbed, tortured, enslaved, raped, murdered, and used eugenics (human experiments) and concentration camps.

For decades, the descendants of the Ovaherero and Nama, of whom up to 100,000 were systematically murdered by German soldiers, have been fighting for justice and recognition of the genocide. It is only because of this heroic struggle that the German government, after having repeatedly denied the genocide, now has to negotiate a so-called “reconciliation agreement” with Namibia.
This agreement, which the German government wants to impose on Namibia, is not a contribution to justice! It is nothing more than a deception and an expression of neocolonialism and the hypocrisy of Germany. While negotiations were taking place between the heads of the surviving communities, this agreement was being forced upon the Namibian government and so-called development aid was used to buy the government over as well. Through this, Germany wants to avoid its responsibility and does not want to pay reparations for the genocide and all crimes that they have committed and the consequences of which still continue to this day. At the same time, utilizing the strategy of “divide and conquer”, Germany is using the government of Namibia against the Ovaherero and Nama.

For this reason, we support the affected Herero and Nama communities who reject this agreement! We join them and condemn this senseless agreement that the German Foreign Minister will solemnly sign in the Namibian Parliament.
Instead of Germany recognizing the brutal genocide of the Ovaherero and Nama, apologizing in a legally binding manner and paying reparations, the federal government is planning a purely symbolic spectacle. We demand an end to this racist, neo-colonial and imperialist policy! We are finally calling for justice for all our African brothers and sisters!