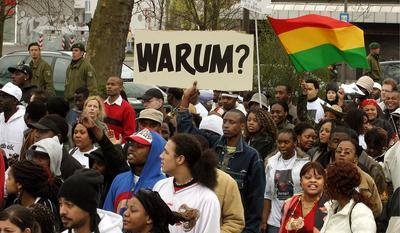 We are organizing and supporting actions and events around May 25, 2021 to mark the…

… first anniversary of the brutal murder of George Floyd on May 25th, 2020.

… African Liberation Day (ALD) , which commemorates the founding of the anti-colonial African Unity Organization on May 25th, 1963.

… tenth anniversary of the brutal murder of Christy Schwundeck on May 19, 2011.

For us, the fight against racism is not a trend or a hobby, but everyday life. We have been aware of how necessary it is to protest not only since the brutal murder of George Floyd. Whether in the USA, Brazil, Haiti, Nigeria, Senegal or here in Germany, everywhere it is necessary that we protect and organize ourselves. May 25th is not just the day George Floyd was murdered. Since 1963, May 25 has also been celebrated on the continent and in the diaspora as African Liberation Day. The day represents our determination to unite and liberate ourselves from all forms of foreign domination.

Today’s world and economic order is based on centuries of European enslavement, mass murder and colonialism. Racism, the idea of white supremacy, has served to justify limitless violence and exploitation since its inception.  The systematic murder, disregard, oppression and humiliation of Black people in Africa and worldwide can only be understood against this background.

Racism did not begin with the Nazi regime. There is a German continuity from profits through transatlantic enslavement, to genocide in Nambia, to today’s state support and trivialization of fascist terror. Germany is responsible for arms exports, wars, for mistreatment in camps as well as mass deaths in the Mediterranean.

Racist police killings are far from unique in Germany. Some of the most famous cases are the murders of John Achidi and N’deye Mareame Sarr in 2001, and of Oury Jalloh and Laya-Alama Condé in 2005. This year is the 10th anniversary of the murder of Christy Schwundeck. She was shot dead by police at the Gallus Job Center in Frankfurt on May 19, 2011.

But racist violence doesn’t just start when police officers persecute and murder us. Whether it is about laws, housing and work or health, education, culture and leisure, it is a whole system that oppresses us in every aspect of life.

The German governments, parties and NGOs have long since proven that they are incapable of standing up for our interests. That is why we call on everyone to organize themselves and fight for a life together without racism, as well as any form of discrimination, exploitation and oppression.

We stand up for the liberation of all Black people. Regardless of which country we live in, we are united by a common destiny and history that originated in Africa. As long as Africa is in chains, no Black person can be truly free. That is why we are positioning ourselves for the end of neo-colonial exploitation and the unilateral war against Africa.

Only together and united are we strong!
Organization and self-defense!